OUK Reveals How He Rejected Rohr As Enyimba’s Coach, Calls For His Immediate Replacement

The former governor of Abia state and current chief whip of the Nigerian senate, Chief Orji Uzor Kalu (OUK) under whose watch as a governor, the Enyimba Football Club won the CAF championship league twice has called for the sack of the current head coach of the Nigerian super eagles Gernot Rohr.

The senator made this call via his social media handle.

In the same social media post, the senator also revealed how he rejected Gernot Rohr as Enyimba Coach and wondered by NFF contracted. 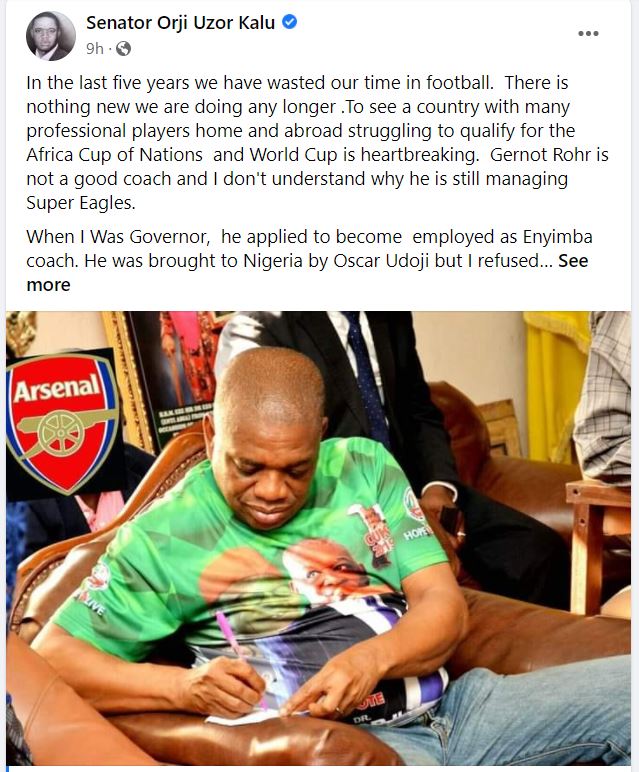 In the last five years we have wasted our time in football.  There is nothing new we are doing any longer. To see a country with many professional players home and abroad struggling to qualify for the Africa Cup of Nations  and World Cup is heartbreaking.  Gernot Rohr is not a good coach and I don’t understand why he is still managing Super Eagles.

When I Was Governor, he applied to become employed as Enyimba coach. He was brought to Nigeria by Oscar Udoji but I refused to employ him.  I am calling on the Chairman of NFF, Mr Amaju Pinnick to wake up and to quickly find a replacement for Rohr.

We soccer lovers don’t need further dissatisfaction in a game, we have the capacity to make ourselves proud.  If the problems you have this year are the same problems you had last year, then you are not a leader. You are rather a problem on your own that must be solved.

ALSO READ  Tension mounts as Kalu gets June 2 date for freedom battle
Be the first to read our news
For publication of your news content, articles, videos or any other news worthy materials, please send to afnewsng@gmail.com. For more enquiry, please call +234-903-332-9775 or whatsapp. To place advert, please call +234-903-332-9775.
Amaju PinnickenyimbaFootballGernot RohrNFFOrji Uzor Kalu
0
Share

WATCH VIDEO: Nobody Can Push Me Out Of IPOB – Simon Ekpa Opens, Reveals Actions

Buhari Not Signing The Electoral Bill, Won’t Change His…

We Will Hand Ahịa Ọhụrụ Lines 1 & 2 Over To Traders…

How Police killed Suspected Armed Robbers, Arrest Others In…

2023: Watch your back, betrayers abound – Nigerian…

Men Who Lie About Their Marital Status Should Be Considered…