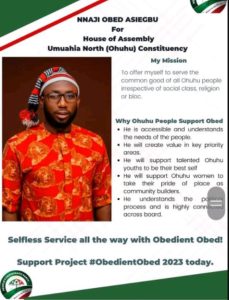 Nnaji Obed attended Saint Finbarr’s College, Akoka Lagos where he exceled in learning and character. He was active in sporting and other child molding activities while at the College. He was a member of Saint Finbarr’s College Football Team. He was the Vice President of the School Interact Club of year 2000. He is currently the Vice President of the Class of 1994-2000 set of the College. 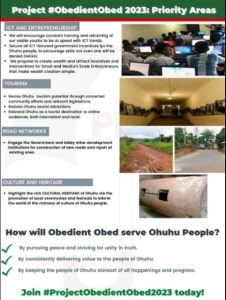 Nnaji Obed proceeded to Nnamdi Azikiwe University, Awka in 2001 to study History and International Studies. He graduated in 2005 after his four years experience at the University.
And in 2006, he proceeded to Taraba State for his NYSC where he participated actively as a corps member, teaching various subjects at a Government Secondary School in Takum, Taraba State.

In pursuit of academic excellence, in the year 2007, Nnaji gained admission for his Master’s programme to study International Relations and Development Studies at the University of East Anglia, Norwich England. 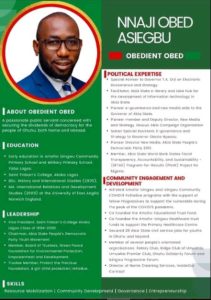 After, his Graduate Programme in England, Nnaji worked in England to acquire experience in the field of Development, Charity, Social care and Information Technology.
Nnaji returned to Nigeria in January 2011 to participate in Leadership, Politics and Governance. He was appointed the Special Adviser to the Governor of Abia State on electronic governance and Strategy by the then Governor of Abia State, Governor T.A Orji. Nnaji became the pioneer e-governance and new media aide to the Government of Abia State. He was instrumental to the creation of the Abia State website, creation of many State’s online platforms, the facilitator of the Abia State e-library and idea hub for the development of Information technology in Abia State. He served meritoriously in several Government committees and organized for the Governor and the Government many town hall meetings as well as being part of various campaign Strategy Directorates. 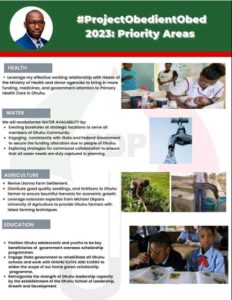 Nnaji was amongst the pioneer member of Okezuo Abia Campaign Organization. He was a member of the media committee of the Dr. Okezie Ikpeazu under the platform of Okezuo Abia Campaign Organization where he served as the Deputy Director, New media and Strategy. Subsequently, he was appointed to serve as the Director New Media and Publicity by the People’s Democratic Party, Abia State in 2015.

Nnaji recently served as the Senior Special Assistant on e-governance and Strategy to Governor Okezie Ikpeazu.
He is a member of the Abia State World Bank States Fiscal Transparency, Accountability, and Sustainability – (SFTAS) Program-for-Results (PforR) Project for Nigeria aimed at strengthening fiscal transparency, accountability, and sustainability in the participating States.

Nnaji has helped in capacity building and most especially, job creation. Through his public service influence, over 20 job seekers from Ohuhu and beyond have secured employment to work in the Abia State civil service.
Nnaji is a public servant with community interest; he is serving his community’s interest as well as the public interest to the best of his current capacity. He has attracted numerous ASUBEB basic School projects in the community Primary School. He initiated Amafor Isingwu and Isingwu Community COVID19 Palliative programs with the support of his fellow Progressives in Amafor and Isingwu to give succor to the vulnerable during the peak of the COVID19 pandemic in his community. To increase school age enrollment and community school capacity, he co founded the Amafor Educational Trust Funds.
To ensure the provision of quality healthcare services, he co founded the Amafor Isingwu Healthcare trust funds to support the Primary Healthcare Centre in his Amafor Isingwu community. Nnaji Obed has on numerous times, carried out the grading and maintenance of Amafor road.

He is also an entrepreneur who has created platforms for employment and training to many. He is the Director of Namo Cleaning Services, InsideOut Concept and partner in other small and medium schemes.

Nnaji Obed Asiegbu is happily married with children.
And to the glory of God, Nnaji Obed Asiegbu nicknamed Odibo Ohuhu by Dee Sam Okwulehie
is seeking the support of his people, Ndi Ohuhu and residents of Ohuhu to represent them in the Abia State House of Assembly come 2023.
Obedient Obed
Obedient to the People
Obedient to Serve

AFNEWS Sendforth It’s Batch A Corps Members, Advises Them On Their New Phase Of Life