Wike and a PDP chieftain, Newgent Ekamon, are named as complainants in the FHC/ABJ/CS/782/2022 suit.

The suit is based on the party’s presidential primary, which was held in Abuja on May 28 and May 29.

While PDP is listed as the first, the Independent National Electoral Commission (INEC) is listed as the second respondent.Tambuwal and Atiku are the third and fourth respondents, respectively.Recall that Tambuwal had during the PDP presidential primary stepped down for Atiku and also demanded that his votes should be counted for Atiku and emerged as the candidate of the party.

Atiku polled 371 votes in the primaries, compared to Wike’s 237 and Bukola Saraki’s 70.

Wike and his co-applicant requested the court to rule on eight grounds in the original summons, including whether the PDP’s alleged transfer of Tambuwal’s votes to Atiku was invalid and unconstitutional.

The plaintiffs requested that the court decide whether Tambuwal lost his right to vote after he resigned in favour of Atiku.

He requested the court to rule on whether Tambuwal “deserved to forfeit his votes having stood down during the primaries.”

If these disputes are resolved in their favour, Wike and Ekamon claimed, the court should give nine respites, including a ruling that the supposed transfer of Tambuwal’s votes to Atiku is unlawful.

The plaintiffs are also asking for a ruling that the PDP committed negligence and bad faith by giving Atiku the votes cast by the governor of Sokoto in the primaries.

They prayed the court to “cancel the transfer of votes and a corresponding order restraining the 3rd respondent (Tambuwal’s) withdrawal in the primary was done after voting had commenced.”

The applicants further requested that the court rule that the PDP and Atiku abused the situation created by Tambuwal’s withdrawal by allowing the governor of Sokoto to influence delegates to support the former Vice President in the primary.

Wike and Ekamon requested that the court order INEC to strike Atiku’s name off “its list of candidates in the 2023 presidential election” or to reject him outright.

“The 2nd applicant (Wike) won the primaries if the votes of the 3rd respondent (Tambuwal) had not been transferred or assigned to the 4th respondent (Atiku),” the suit partly reads. 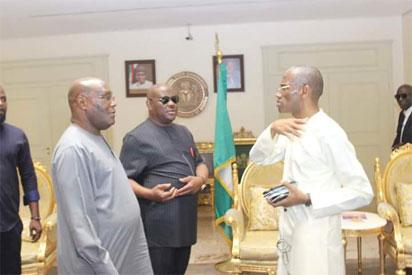