The managing Director Tstv, Dr Echefu Bright made this known at the public hearing on “Pay-TV Hikes And Demand for Pay-per-view subscription model,” organised by the Senate Ad-hoc Committee chaired by the Deputy Chief Whip of the upper legislative chamber, Senator Aliyu Sabi Abdullahi. 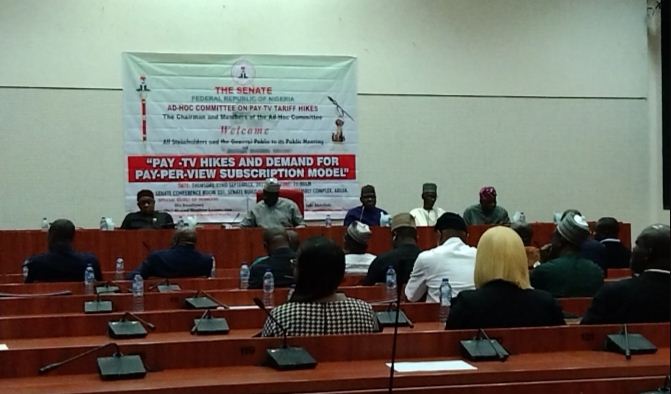 According to Dr Echefu, “Tstv is a Pay-Tv that is pro-masses, we understand the problem Nigerians face when it comes to Pay-Tv, you are made to subscribe to channels that you don’t need or watch so, we designed a model that is favourable to Nigerians.

“The highest amount you will be paying daily for any station is two Naira. That is 60 Naira for that particular station in a month.

“No matter how you view it, you will see that it is a better approach for the consumer than what we are used to”
Contrarily, Major cable television firm including MultiChoice Nigeria rejected the proposed pay-per-view for television, saying that the free market economy is not favourable to the proposal, that it is not in the interest of consumers, adding also that it will further hurt the economy.

According to the Chief Executive Officer, Multichoice Nigeria, John Ugbe, the company had been operating with license for past 27 years, adding that the free market economy is not favourable to pay-per-view.

Ugbe, who said they operate within that framework of the business environment in Nigeria, said pay TV operators, just like others should have the freedom to determine their prices.

“The demand for pay television services fluctuates and is very sensitive to the price a subscriber has to pay and affordability factors. For example, demand may be higher during December when subscribers have more discretionary income or are willing to spend more on entertainment and lower during other periods in the year, i.e we see subscribers switching off the service in January when children go back to school and school fees have to be paid. This places constant pressure on MultiChoice to always be price-sensitive.

“In determining subscription fees, MultiChoice takes into account many factors, including inflation, increasing input costs, ever escalating costs of technical upgrades, the impact on subscribers and the exchange rate fluctuations.

“The costs of satellite pay television are massive, ongoing and increase, rather than decrease, with time. Due to the current adverse economic situation, some of these factors which we discuss in detail below have over the years negatively impacted our cost of doing business and have put us under very challenging conditions, ” Ugbe said adding that MultiChoice has made immense contributions to Nigeria’s GDP from FY2014/15 to FY 2020/21.

“The aggregate economic impact over the past five years is estimated to sum to around $2.5bn. By March 2021, it had rolled out the GOtv network across all six geo-political zones of Nigeria, providing coverage to close to 5 million Nigerians.

“With a total of 81 transmission sites, the cumulative spend on transmitter sites alone amounts to N25 billion, 69% of which was spent locally. MultiChoice has provided decoder subsidies to its customers worth N32 billion over the last 5 year period. It has further supported the government’s efforts in educating the public about digital migration and has run a digital migration themed marketing campaign across the country,” he added.

Also speaking, former NBC DG, Emeka Nba said a pay per view (PPV) is not the same, and is very different from pay as you go (PAYG).

“The PPV model allows a subscriber to watch some special one off events, usually of the high-ticket variety in sports and entertainment, by paying for such events in addition to having an active subscription. Pay-As-You-Go accommodates a metered mode of service, where consumers are billed only for the service they consume and not for a fixed period.

“The desire by this Committee to adopt PPV is further challenged by the nonexistence of any technology that can detect and or determine the viewers are tuned in per time. Once it is impossible to have this knowledge, billings based on “per view” become difficult if not almost impossible,” he said.

Making his presentation, the CEO of Billsbox Services, Dr Monday Michaels Ashibogwu, said the assumptions around PPV being better are incorrect and are underpinned by a misunderstanding of the model.

“The simple definition of PPV is a system under which a viewer is required to pay a certain fee for viewing special programmes such as live events or sports. The programme is broadcast at the same time to everyone subscribing to PPV service. Examples of content available on PPV include big-ticket boxing, WWE, UFC

“Pay-Per-View (PPV) means the viewer pays for only what is watched at a fixed broadcast time. The addition of PPV to a package grants viewers access to programmes on a pay per view basis. In fact, this means that viewers purchase individual programmes they desire to watch on a specific PPV channel. The payment is specifically for a programme, show or event.

“Most prominent of PPV offerings are sporting events such as WWE, boxing UFC and other live event shows. That the programmes are broadcast live means that they run on at a fixed time and are not subject to the control of the television package owner, who is more or less a vendor. PPV is essentially a pay as you use feature that is added on, upon payment for specific content, to a pay television package. It is a stand-alone, ” he said.

“While it is commendable that the Senate cares about consumers, there must also be empathy and care for businesses. It will do the country no good for foreign investors to get the feeling that an arm of the Nigerian government is an adversary of investors. It is our hope that your investigation will throw light to the market realities, regulatory framework and international best practice, “Ashibogwu added.

The Coordinator, Nigerian Viewers Collective, Mr Anthony Iyare, said Nigeria must desist from inflicting further pains on the economy via strangulating their operations.

“We are aware that inflation in the country is now over 20 per cent, the highest in 17 years. The content which they offer is bought in dollars and there has been a geometric drop in the value of the naira to the dollar. Government itself has increased the prices for almost all its services.

“The prices of services and consumer goods, including household ones, have risen astronomically and continue to do so in the last three years. Local and international economics dynamics are responsible.

“Pay TV service providers are not insulated from economic vagaries. Even the government, part of which the esteemed committee is, has raised the pump price of fuel. Diesel and aviation fuel prices have shot up beyond belief.

“The broadcast sector, which includes Pay TV companies, was ignored when palliative measures given to other sectors at the time COVID-19 came to shred finances. For them to remain in business and to continue to maintain the same standards or improve on such, requires them to charge rates that reflect economic realities. Pay TV service providers are victims as much as their subscribers or customers,” he added.

The ad hoc committee chairman, Sen Aliyu Sabi Abdullahi said they don’t want to undermine the freedom of the Pay-Tv, but that in a span of six years, there tariff has increased up to 55 percent.

“We need to have price regulation. Price increases need to be regulated. NBC from all intent and purpose are the problem of the country when it comes to pay TV, ” Sabi said.

He said for NBC to have made a presentation in a paper without their letterhead and not signed by the DG of the agency.

Senate President, Dr. Ahmad Lawan who was represented by the Senate Leader, Abdullahi Ibrahim Gobir, said Nigerians will always go for services that are good and affordable.

WATCH VIDEO: Where Ayu Said He Will Resign If PDP Presidential Candidate Emerges From The North

Again, House Of Reps Meets Head Of Service, Others Over ASUU Strike