The Federal Ministry of Trade and Investment, through Trademarks Registry, has officially notified the National Broadcasting Commission (NBC), that ‘Enyimba FM Aba’ which was legally registered by Rethink Media Network Ltd for its radio station operation in Aba, Abia State, is illegally being used by one EMPAU Communication Ltd, believed to be owned by immediate past Executive Secretary of National Agricultural Land Development Authority (NALDA), and a chieftain of All Progressive Congress (APC) Mr. Paul Ikonne. 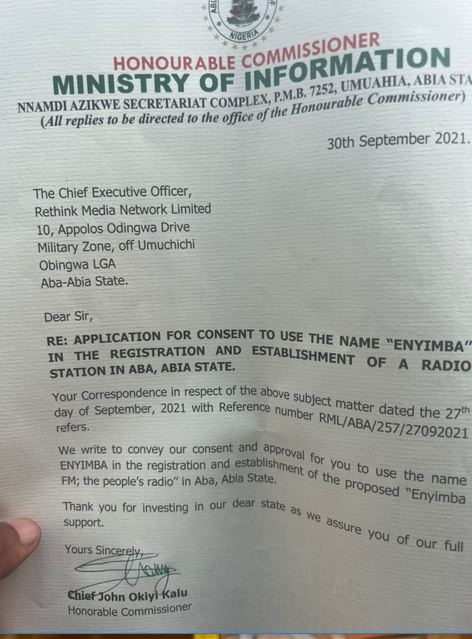 According to a letter dated 25th July 2022, authored by Ogunbanjo A.T for Trademarks Registry to the Director General of NBC, sighted by our Reporter in Abuja, NBC had apparently in a letter dated 15th July 2022, sought the Trademarks Registry clarifications on why two different companies should be licensed to use the name ‘Enyimba FM Aba’, for commercial radio station operation in the same city and State.

In response, the Trademarks Registry categorically stated; “referring to your letter dated July 15, 2022, on the above-stated matter (Use of “Enyimba FM as Trademark by Two Different Companies Licensed by the Commission), I am directed to inform you that investigation in this office has revealed that the application “ENYIMBA FM” by RETHINK MEDIA NETWORK LTD was first in time and was issued on approval based on a consent letter from Abia State Government through the State Ministry of Information. 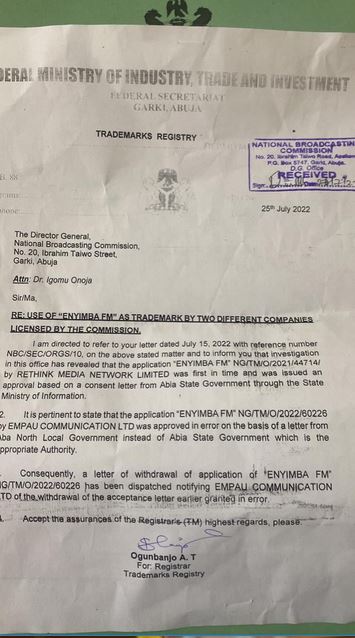 “It is pertinent to state that the application “ENYIMBA FM” by EMPAU Communication Ltd was approved in error on the basis of a letter from Aba North Local Government Area, instead of Abia State Government which has the appropriate authority. 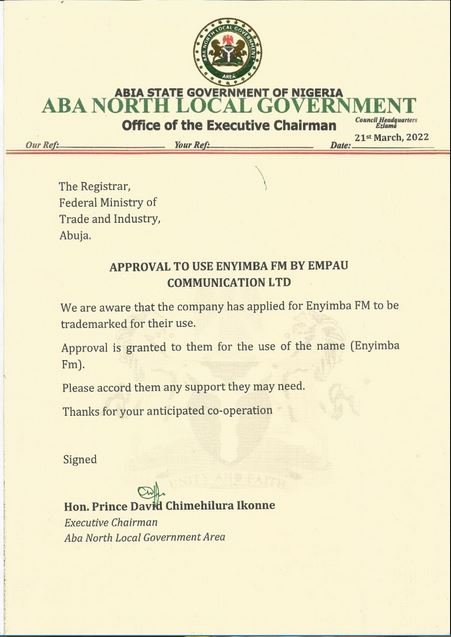 “Consequently, a letter of withdrawal of application of ENYIMBA FM has been dispatched to notify EMPAU Communication Ltd of the withdrawal of the acceptance letter earlier granted in error.” 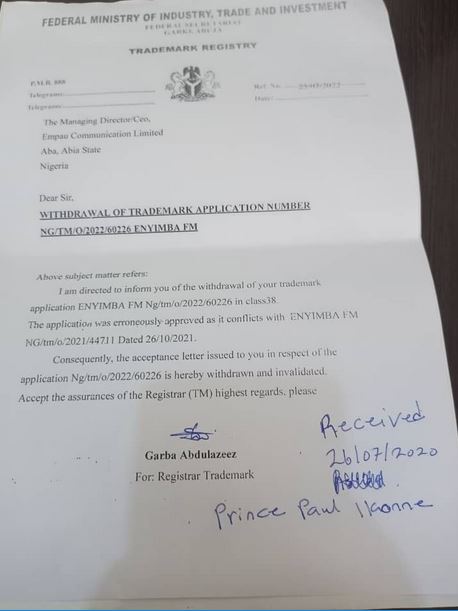 “Consequently, the approval letter issued to you in respect of the application NG/TM/O/2022/60226 is hereby withdrawn and invalidated.”

When contacted, Rethink Media Network Ltd Head Public Relations, Mr. Chigozie Joshua, recalled that after it applied for a radio license which was approved by the NBC, the Company on September 2021, approached the Abia State Government through the ministry of information, with an application for consent to use the name ENYIMBA FM for registration and establishment of a radio station in Aba as required by Trademarks Registry laws and guidelines, given that ENYIMBA is classified as a ‘Geographical Area’.

The Management further noted that approval was granted by the State Ministry of Information in September 2021, while the Trademarks Registry in October 2021, granted and approved the application of Rethink Media Network Ltd to use  ENYIMBA FM in classes 38 and 41, respectively, for its radio stations operation in Aba.

Rethink Media further revealed that in February 2022, after the allocation of 93.5 FM frequency by NBC, it unveiled the station’s name and logo as “93.5 Enyimba Fm” with its slogan as “…the peoples’ radio”, and also laid the foundation for the ultramodern radio station in Aba.

However, further investigation reveals that EMPAU Communication Ltd claimed that it got approval from the Trademark Registry on the 17 of March 2022, with a consent letter from the chairman of Aba North Local Government Area Council on the 21 of March 2022, five days after the alleged approval by trademark.