The back and forth debacle between Canada-based Nigerian woman, Stephanie Otobo, and Apostle Johnson Suleman, the General Overseer of Omega Fire Ministry, over an alleged amorous relationship the duo shared has gained momentum as the former has released explicit photos of the clergyman in a Twitter thread.

Otobo, who had some years ago accused the clergyman of having an amorous relationship with her took to her Twitter handle on Monday, shared screenshots of her video chat with Suleman asking him to come forward and debunk her claims.

An alleged photo of the clergyman holding his penis was shared and another showing her breasts while on a video call with him was also shared online.

She accused the cleric of doing everything to silence her from progressing and almost ended her life.

If these screenshots were fake, how did i get his pics that aren’t public pics at the first place and how come I’m the first to release this kind of pics of him? He has changed his hairstyle twice since i came out to speak up with receipts. He has done a lot to appear different🤣

Some people kept on wondering why i came out exposing apostle Johnson suleman, and why i haven’t let go ever since.

The truth is that, i never planned to. He pushed me to the wall and the only way i could fight back was to cry out and make everything known. 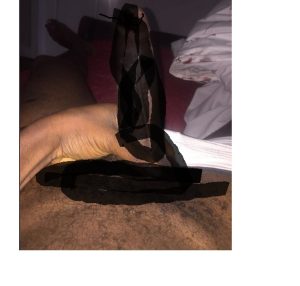