Operatives of Ogun state police command arrested seven suspects involved in the planting and cultivation of India He-mp on April 2nd, after discovering a large expanse of land cultivated for the cause.

The suspects identified as Nelson Enu, Patrick Emmanuel, Samuel Paul, Ekioya Joe, Monday Okoro, Endurance Eliobe and Stanley Ogejiagba were arrested following a cue gotten by policemen at Isara divisional headquarters, stating a large expanse of land was being used for the purpose of the plantation at Lokuta village in Remo north local government. 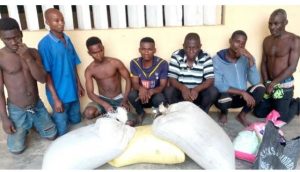 The cue further revealed the suspects threatened the villagers who though had no idea on what they wanted to use the cultivated land for, for daring to disturb them while the planting was going on.

Acting on the information received, CSP Shobiyi Oluwatoshin, DPO Isara division, mobilized a team of officers and local vigilante to the piece of land moved to the scene where the suspects were apprehended and arrested.

DSP Abimbola Oyeyemi, the spokesperson of the State Police Command, ALSO confirmed the arrest of the seven adding that the State Commissioner of Police, CP Lanre Bankole has ordered a quick transfer of the suspects to State Criminal Investigation and Intelligence Department for onward transfer to National Drug Law Enforcement Agency (NDLEA) for possible prosecution.

Items recovered from them include; five bags suspected to be Indian He-mp seedlings while according to the suspects, two bags has been previously planted.


Mark 11 vs 22- 24: And Jesus answered them, "Have faith in God. Truly, I say unto you, whoever says to this mountain, "Be taken up and thrown into the sea, and does not doubt in his heart, but believers that what he says will come to pass, it will be done for him. Therefore, I tell you, whatever you ask in prayer, believe that you have received it and it will be yours
Indian h-emp plantation
0
Share

EXTRADITION: Why Abba Kyari Should Not Be Granted Bail – AGF Reveals Secret

(VIDEO): How NDLEA Uncovered Sachets Of Coc-aine Stacked In Bedsheets