OSUN POLL: Do Everything You Can To Win All 2023 Elections- Adamu Charge APC Members

OSUN POLL: Do Everything You Can To Win All 2023 Elections- Adamu Charge APC Members

Ahead of Osun State’s governorship election, the All Progressives Congress (APC) party has inaugurated its 86 member national campaign council.

Speaking at the inauguration ceremony in Abuja, the National Chairman of APC Senator Abdulahi Adamu, said in spite of the challenges posed by the governorship election of Ekiti state, the party scaled with flying colors by the divine grace of Almighty God.

The National Chairman said: “The next huddle we have is to confront with all vigor, with all strength that we can muster, the forth coming Osun governorship election.”

He urged the committee members to gear up as it won’t be easy, so they should all get ready as Osun will be more difficult for them.

The National Chairman urged them to leave no stone unturned but to go there and do whatever is ‘doable’ within the laws of Nigeria and electoral laws to win.

Senator Adamu further stated: “The plan to win and the ability to execute the plan is with the leadership that this council is going to provide in the campaign.

“My tolerance level and this national working committee level for failure is really really zero”.

Commenting on the capabilities of the campaign Council, the National Chairman said: “Most of you have been statesmen in your own states, the offices you held before today, but for this exercise, take off the big guns take off the creepy suits, wear them and go down the trench and bring that victory we want”.

Nobody should come back to us crying, failure is not our own by the grace of God.

Whatever it takes within the laws of the land, i said go for it, win the election.

“Let them go complain, let them go wherever,let’s win the election, we have no apologies whatsoever because these two elections are will affect the national election coming up in 2003. 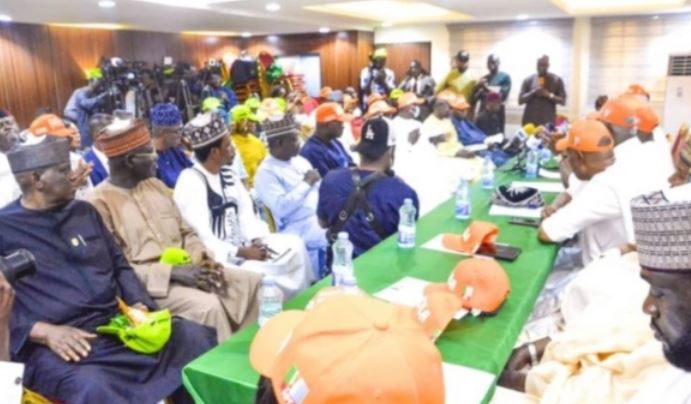 “It will go in our credentials that we have the winning track record, this National Working Committee that you elected have a commitment.

“What we mean by the commitment is the 2023 general election is facing us. We have to face it squarely.

“we must show those who love us by showing those who are our adversaries in the strongest possible way that we are in control.

“The reality is Nigerians chose APC and we’ll do everything we can to retain this position of envy” he said.

“We have chief Asiwaju Bola Ahmed Tinibu as our presidential candidate you all know that.

“These elections are first steps we are taking towards victory in 2023. We must not play with this, we have to start preparing for these now.

The challenge we have is that everybody’s arrow is pointing at us, so we must show our capacity to bear the pressure and move out forces forward to victory.

“We are winning the battle of the states, but the real war to be won is the presidential election in 2023”.

Adding to admonition, the Co-Chair of the National Campaign Council of APC, Dr. Abdullahi Ganduje said “the party scored over 60% at the election all thanks to the National Working Committee (NWC) and the National Chairman”.

He assured the National Chairman that they will work hard and committed to the job, adding that some of them have already started behind the scene.

According to him, one important issue about Osun election is reconciliation as internal dynamics of the party is very important hence reconciliation is totally necessary so that they will believe in each other and all stakeholders in Osun state will come together to constitute one force in order to win the important election.

Dr. Ganduje, expressed joy that the secretary of the party is from Osun state and will be very useful to winning the election in osun state.

He noted: “we are told that we are fighting an opposition with moneybags but, we want to assure you that we are coming with strategy bags”..

The Co Chair sought the cooperation of all stakeholders especially governors and members of NWC to coordinate well with all the committees and stakeholders in conducting the election while assuring that the election is a task that must be done within the processes of democracy and also within legal procedures.