The Lagos State University Teaching Hospital (LASUTH) has denied one Lawrence Omatule who is said to be a nurse that allegedly performed fibroid surgery on an Edo businesswoman, Fatimoh Isa.

The family of the patient had alleged that they discovered it was a nurse attached with LASUTH who performed surgery on Isa at the Felobam Alpha Clinic in the Mafoluku area of Oshodi, Lagos State, on Thursday, April 7. READ HERE

Reacting to the development which has sparked reactions, LASUTH management in a statement released on Wednesday, April 14 said the said Omatule Lawrence is and has never been a staff of the hospital.

SH0CKING: How Woman Died After A Nurse Allegedly Performed…

How LASUTH Doctors Damaged My Legs, Made Me Consider Suicide…

“The attention of the management of Lagos State University Teaching Hospital has been drawn to a report in today’s PUNCH Newspaper, Wednesday, April 13, 2022; where the nurse who allegedly carried out a fibroid surgery on one Mrs Fatimoh Isa, who subsequently died, was said to be a staff of our hospital.

“We wish to state categorically that after a painstaking investigation, we were unable to confirm that the said Lawrence Omatule is or was ever a staff of our hospital. We, however, have genuine information that he works in a secondary health facility on the mainland.” 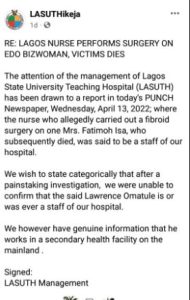 Meanwhile, a cousin to the deceased in a series of Tweet said it has been discovered that the said nurse is a staff of Alimosho General Hospital. 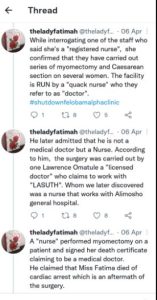 SH0CKING: How Woman Died After A Nurse Allegedly Performed Surgery On Her | DETAILS

B00M: My Husband Is Mentally Ill, Epileptic, Impotent, Others – Nurse Cries Out In…

How LASUTH Doctors Damaged My Legs, Made Me Consider Suicide – Amputee Cries Out