B00M: How Wife Sold Her Husband To NDLEA | READ DETAILS

A Twitter user, Bibi, Bolouere, @boluxxxx have recounted an incident where a wife allegedly sold out her drug dealing husband to the National Drug Law Enforcement Agency (NDLEA).

In a series of thread on Sunday, July 31, @boluxxxx wrote;

Apparently na the wife report am.

They sha found cocaine under the bathtub. He was dealing. And they have a newborn.

You see this our country as it is? We deserve it. We are us, we are our leaders. That’s us.

JUST IN: NDLEA Set To Burn N193b Worth Of Coc@aine In Lagos…

NDLEA Seizes N193billion Worth Of Dru-gs In Lagos, Buhari…

I feel the need to throw more light on this based on how the conversation is going.

So it’s her house now.

Clearly because of the issue.

4.The security man attested that since they moved in different cars go by the house and they wondered why. He’ll later try to recruit the security man(another long story)as a dealer because he’s a dealer dealer.

What we both agreed on is that she probably knew before they got married because they clearly dated so something else must have prompted her reporting.

Ps; it happened a little while back but my friend told me yesterday

Lastly, I’m shook at the conversation being about the wife than drug dealing because honestly that was the primary thing that caught my attention.

Where we had smoke for her was proceeding to date, marry and eventually snitch on a drug dealer.

Something might have gone wrong somewhere, she’s apparently frustrated with the relationship already. You can’t tell me she wasn’t aware he has been dealing.

Nigeria will take care of her kid 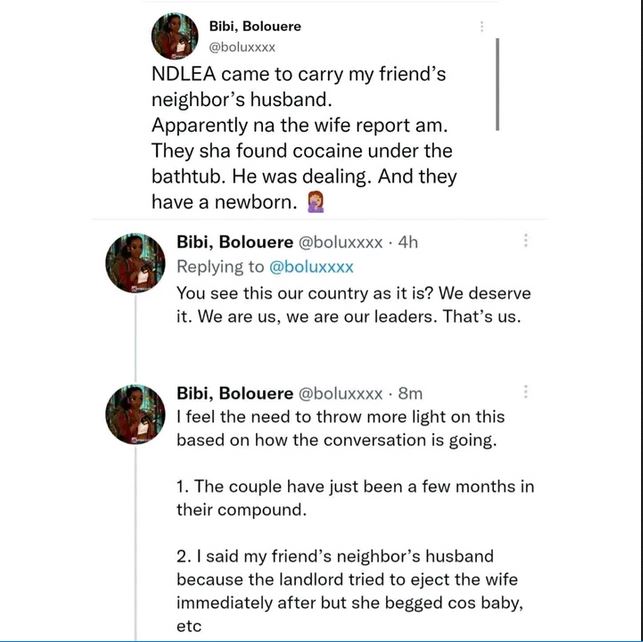 N193B Worth Of Coc@ine: We Didn’t Destroy All Evidence – NDLEA Clarifies…