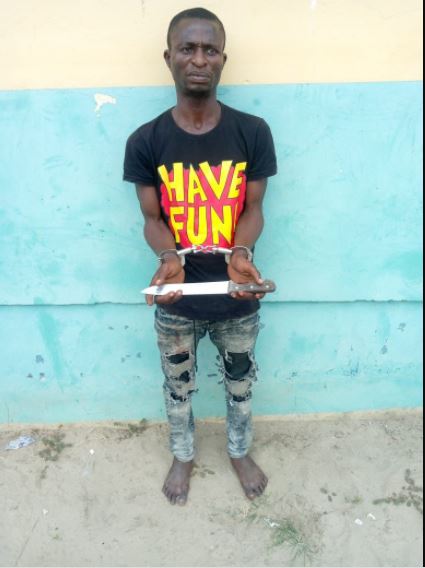 The spokesperson of the state police command, Edafe Bright confirmed this in a statement.

He explained the DPO in the area had received a distress call on January 12, that the deceased had been stabbed to death by the suspect. Reacting to the alert, the DPO mobilized and led Police patrol teams to the scene that was already deserted with the lifeless body of the deceased lying in a pool of his own blood.

The police spokesperson also said investigations revealed the deceased had accused the suspect of attempting to defile his daughter upon finding him in his house. This led to an altercation between the deceased and the suspect.

The Police eventually clamped down on the suspect after trailing him to an uncompleted building in the area.

ALSO READ  [Graphic Photos] 2 Men in Military Uniform Brutally Hack Okada Rider in Abia
Be the first to read our news
For publication of your news content, articles, videos or any other news worthy materials, please send to [email protected]. For more enquiry, please call +234-903-332-9775 or whatsapp. To place advert, please call +234-903-332-9775.
daughterdefilementman stab another to death
0
Share

COVID-19: Recovery Taking Longer Than I Had Thought- Messi Cries Out

Wealth Does Not Guarantee Peace Of Mind – DJ Cuppy…

B00M: Bella Shmurda Slammed By Fans Over What He Did To…

Intra City Train Fare Will Not Exceed N300 Per Journey –…

HEALTH: Why You Should Stop Consuming Energy Drinks -Doctor…

Why Abdulmalik Tanko Was Sacked As A Headmaster Before…