Gov. Ikpeazu Reveals What He Shares With Abiriba Community

Governor Okezie Ikpeazu has described the people of Abiriba as a people with a great and proud heritage whose support he has enjoyed since 2015, and that he deeply cherishes the special bonds he shares with them.

The Governor was speaking today at the Governor’s Lodge Aba when he received in audience a delegation of Abiriba Traditional and Political Leaders led by the Paramount Ruler of Abiriba Kingdom and the Enachoken of Abiriba, Eze Barrister Kalu Kalu Ogbu.

Governor Okezie Ikpeazu told them that he is grateful to the people of Abiriba for the full support they have always given to him and informed them that all Abiriba sons and daughters who work with him in different areas of government have been very exemplary and trustworthy. The Governor stated that he won’t have any hesitation at all in appointing Abiriba indigenes into high positions because they are dedicated and hardworking.

He also said that the two sons of Abiriba who are in the State House of Assembly are his allies.

He directed the Commissioner for Works to ensure that work commences on the Amanta Road which he promised to build in honor of the Late Ezeogo Dr Anagha Ezikpe at his burial, and other projects.

He also promised to look favorably on their request for the appointment of an indigene of Abiriba as Permanent Secretary in the State Public Service.

On the request by the Abiriba Communal Improvement Union for official authority to commence the rehabilitation and redesign of the Enuda High School, Abiriba, the Governor said that he won’t stand against any such request and assured that he would carefully study the documents presented and revert in a matter of days. 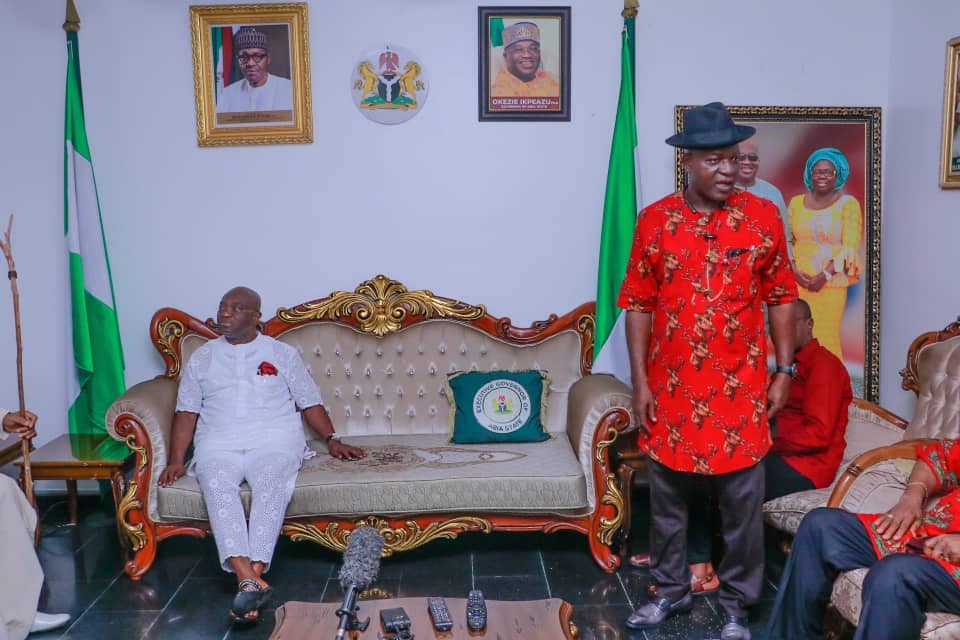 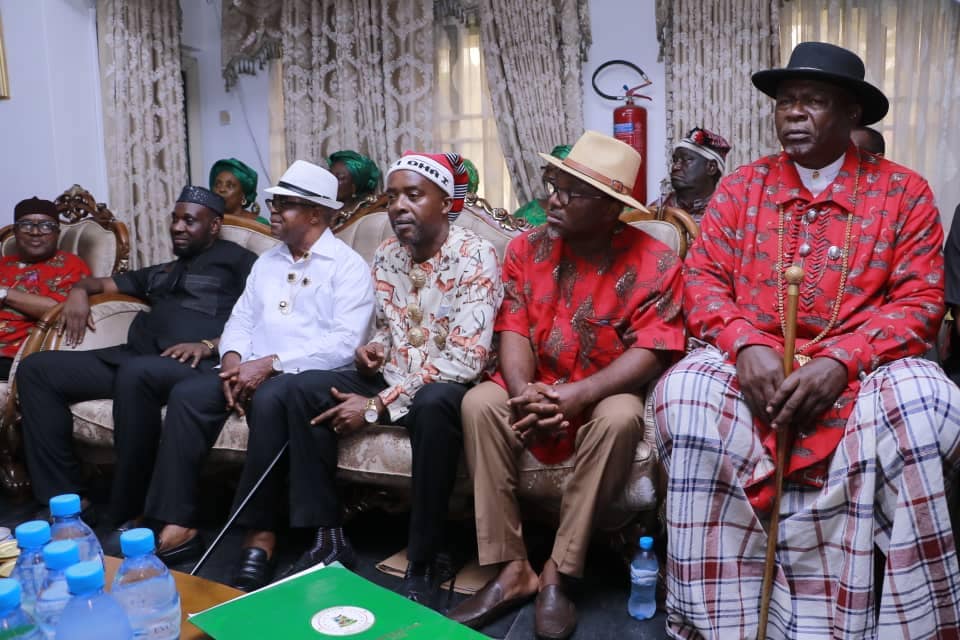 Earlier, Leader of the delegation and Enachoken of Abiriba, His Majesty Eze Kalu Kalu Ogbu who is the First Deputy Chairman of the Abia State Council of Traditional Rulers told the Governor that the leadership of the Abiriba Kingdom came to express their deep gratitude to the Governor for his positive disposition towards Abiriba and her people.

The Monarch said that the latest appointment of their illustrious son, Chief Mba Ukariwo as Pro Chancellor and Chairman of the Governing Council of the Abia State University is yet another demonstration of the love the Governor has for Abiriba Kingdom.

He said that the people of Abiriba are strong allies of the Governor and will continue to support him and his administration.

He used the opportunity to remind the Governor of his promise to fix the Amanta road in Abiriba in honor of the Late Ezeogo Dr Anagha Ezikpe and also requested the Governor to kindly approve the appointment of an Abiriba indigene as a Permanent Secretary in the State Public Service. 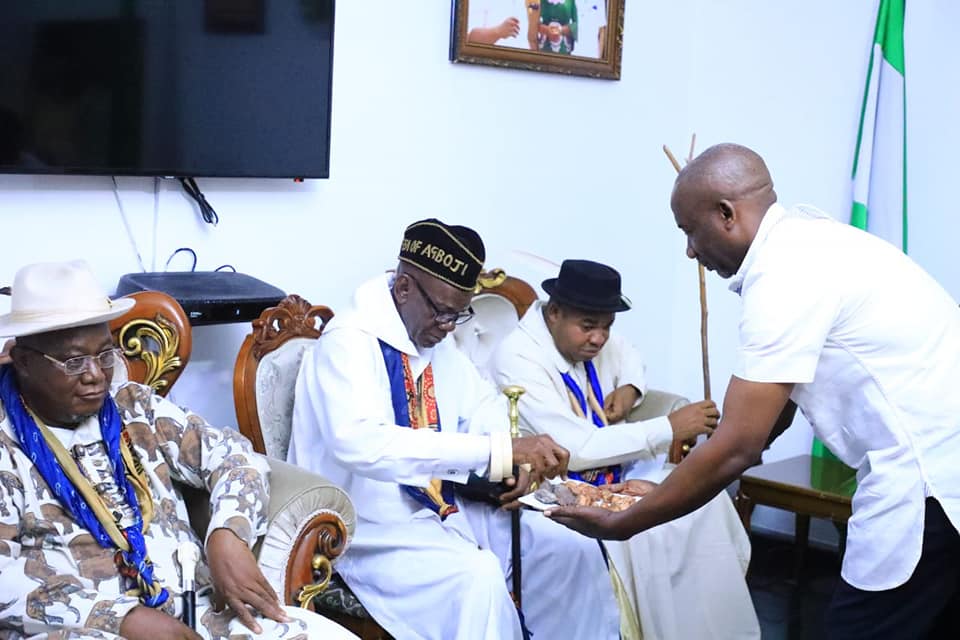 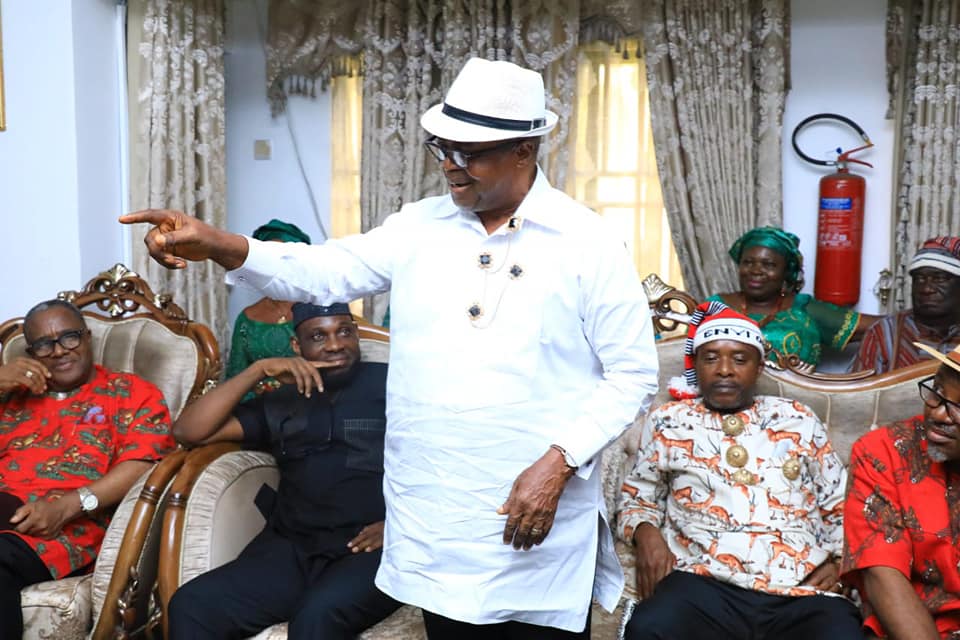 He thanked the Governor for fulfilling every promise he has made to the people of Abiriba.

Also speaking, the new Pro Chancellor and Chairman of the Governing Council of the Abia State University, Chief Mba Ukariwo thanked the Governor for finding him fit for such appointment and assured him of his total dedication to the assignment.

The PDP Chieftain used the opportunity to inform the Governor that a strong chieftain of APGA in Abiriba and the Chairman of the Aba Chapter of the Abiriba Communal Improvement Union, Chief Nduka has joined the PDP and is part of the delegation. He recounted the various instances where the Governor has single handedly ensured that the people of Abiriba are carried along in his government and assured the Governor that in the build up to the 2023 elections, the people of Abiriba will strongly stand with the Governor.

Others who spoke at the event included the Honorable Members of the Abia State House of Assembly representing Ohafia North and Aba Central State Constituencies, Hon.Mandela Obasi and Hon. Sir Abraham Oba and a former Commissioner for Transport in the State, Chief Barrister Mrs Nnenna Obewu.

A representative of the Abiriba Communal Improvement Union, Lagos Branch, Chief Nwaka Inem made a presentation to the Governor on the lofty plans of the Union to rebuild the Enuda Hugh School, Abiriba which was established in 1954 and requested the Governor to kindly approve their request and attend the event marking the commencement of the project.

A Traditional Ruler in Abiriba, Eze Benjamin, the Effa of Agboji later made a presentation of gift items to the Governor on behalf of the people of Abiriba.

Honorable Commissioner for Trade and Investment, and a son of Abiriba, Chief John Okiyi Kalu had earlier introduced members of the delegation while the Executive Chairman of Ohafia Local Government Area, another son of Abiriba, Dr. Okorafor Okorafor Ukiwe moved the Vote of Thanks.

Commissioner for Works, Elder Bob Chiedozie Ogu was part of the event.


Mark 11 vs 22- 24: And Jesus answered them, "Have faith in God. Truly, I say unto you, whoever says to this mountain, "Be taken up and thrown into the sea, and does not doubt in his heart, but believers that what he says will come to pass, it will be done for him. Therefore, I tell you, whatever you ask in prayer, believe that you have received it and it will be yours
Abia StateAbiriba CommunityGovernor Okezie Ikpeazu
0
Share