A Magistrate court sitting in Aba North district, have ordered the arrest of Mr. Chinedu Ikeokwu, the General Manager, Traffic and Indiscipline Management Agency of Abia State, (TIMASS) for contempt of court order.

Mr. Ikeokwu was said to have flaunted court orders, on a case filed against him by one Mr. Ginikanwa Ikechukwu.

A court order and warrant of arrest seen by All Facts Newspaper, dated August 3, 2022, mandated the Abia state commissioner of Police, Mrs Janet Agbede, to arrest and provide Mr Ikeokwu before the court on August 11, 2022.

“It is hereby ordered that the Commissioner of Police, Abia state arrest the  2nd respondent, Mr Chinedu Ikeokwu (TIMASS GM) the contempt-nor and produce him on the next adjourned  date fro sentencing. Case adjourned  to 11th day of August, 2022 for report of compliance and sentencing” the court order read partly. 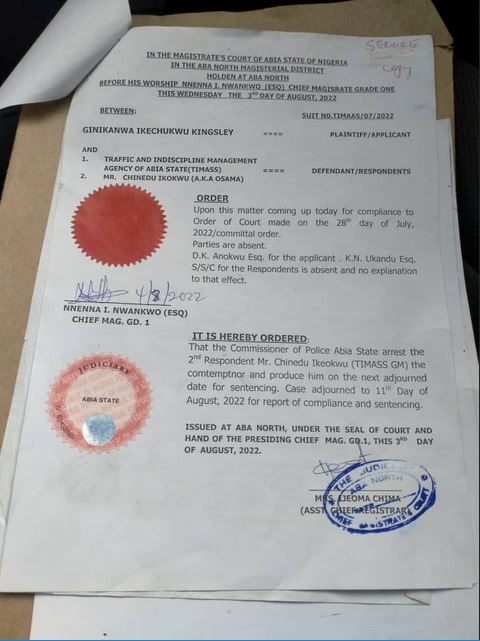 According to Barrister Dennis Kelechi Anokwu, the legal counsel representing the complainant, his client’s vehicle was impounded by operatives of TIMASS in June 2021 around Obingwa, Obikabia area.

Ikechukwu was said to have parked his ash colored mercedenz benz salon car with registration number, CN907LSD along the road on the said day, asking for direction as he was not conversant with the area, before TIMASS officials rounded him. 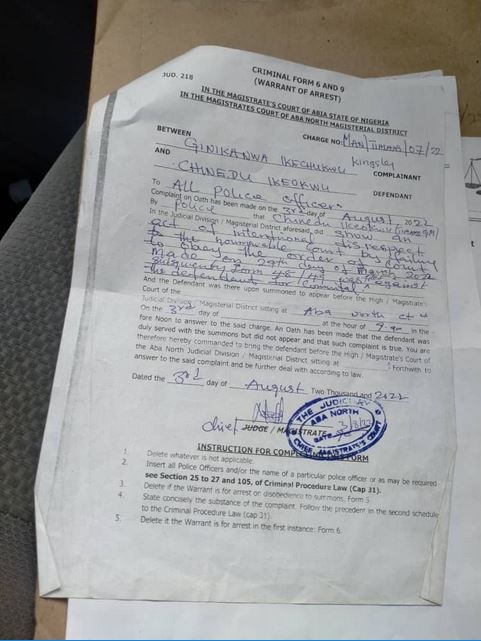 The lawyer told ALL FACTS NEWSPAPER that all plea from his client, fell on deaf ears as his vehicle was driven off by TIMASS officials to their office.

“he didn’t have the money because they were asking him to pay N40,000,  because he didn’t have that money, he practically abandoned that vehicle there. It was until march 2022; 9 months after, that he told me about it” the lawyer said.

A case with suit number; MAN/MISC/TIMAAS/07/2022, was filed against Ikeokwu on March 21, 2022 by Barrister Anokwu on behalf of the complainant.

The magistrate court presided over by the Chief Magistrate, Grade one, His Worship, Kelechi Ume, Esq,  on March 29, 2022, ordered TIMAAS to release the vehicle to Mr Ikechukwu. 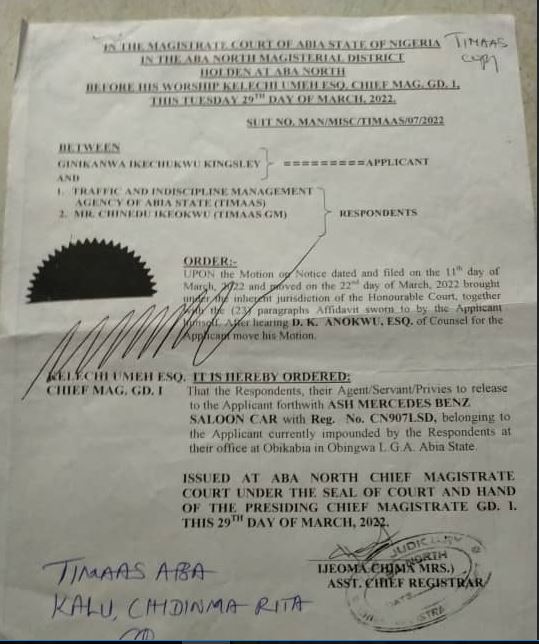 However, “even after that they (TIMASS)continued to disobey court order by not releasing that vehicle as instructed by the court”.

Barrister Anokwu added that TIMAAS officials still refused to release the vehicle to him and his client after they had presented to the officials, a court order, proof of ownership, a photocopy of a booking sheet given to his client as he had lost the original copy.

Meanwhile, responding to inquiries made by ALL FACTS NEWSAPER, TIMAAS boss, Mr Chinedu Ikeokwu said he was yet to receive a court order/warrant of arrest.

He however refuted claim by Barrister Anokwu that the vehicle has not been released to his client. According to Ikeokwu, the vehicle in question was released last week.

First, the man in question isn’t the same as the offender (whose name is on the offence booking sheet).

And that was the first issue.

He brought an order from the court and mind you, I am not incharge of the legal sector of the Agency, so they only demanded that he present that offence booking sheet (which will serve as a both proof of ownership and the agency will also use it for reconciliation).

They said the person with the offence booking sheet is in Lagos and all that.

BBNaija: Beauty apologises to fans for her disqualification