After both platinum award-winning singers dropped new songs on Friday to the extreme satisfaction of fans, Davido’s track, ‘Stand Strong’ went on to top the Apple Charts- a feat the singer took to his social media space to announce.

However, the recent turnout of events has dispelled all hopes of a buried hatchet between the two songwriters as Grammy-winner, Burna Boy has shared a screenshot of the Apple Music Chart  showing his latest single topping that of his colleague Davido barely 48 hours after it was released.

Evidently jeering at his counterpart, the 30-year-old artiste accompanied the screenshot with a laughing emoji. 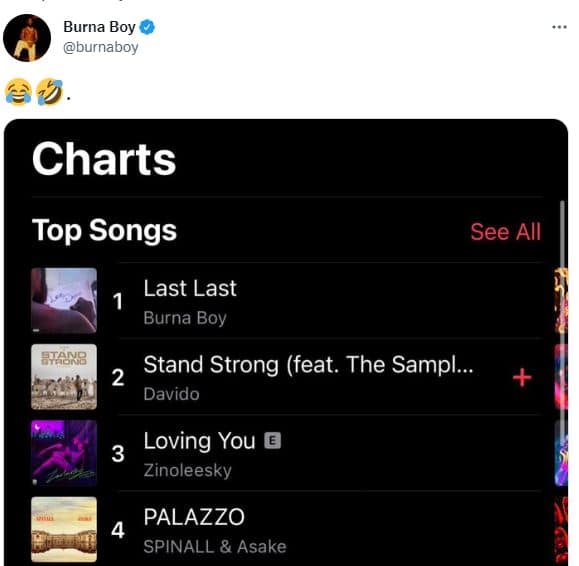 
Mark 11 vs 22- 24: And Jesus answered them, "Have faith in God. Truly, I say unto you, whoever says to this mountain, "Be taken up and thrown into the sea, and does not doubt in his heart, but believers that what he says will come to pass, it will be done for him. Therefore, I tell you, whatever you ask in prayer, believe that you have received it and it will be yours
burna boyDavido
0
Share

2023 PRESIDENCY: List Of APC Aspirants Who Submitted Their Nomination Forms Before Deadline

VACANCIES IN BUHARI’S CABINET: List Of Ministers Who Have Resigned