ABIA TAX COLLECTION: Erondu In Tr0uble As Group Move Against Him |READ WHY

Trouble might be brewing for One of Abia state tax collector, Elder Azubuike Ihuoma Erondu alias Mopol, as Forum  for Road Taxes, have stepped up to query the alleged high-handedness and extortion of their members by Erondu. 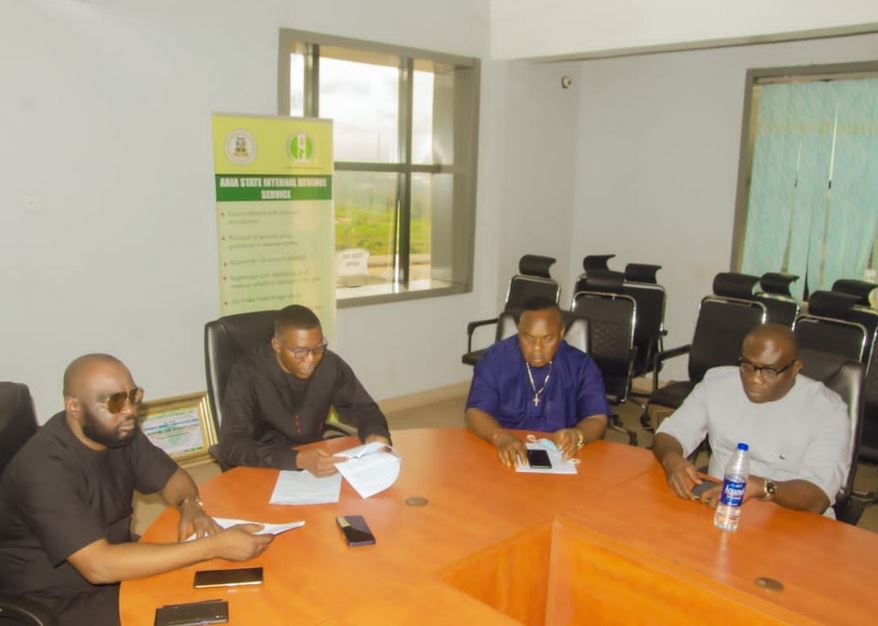 Erondu was in charge of E-Emblem and Abia State Passengers Integrated Manifest and Safety Scheme (ASPIMSS) tickets until he was recently relieved of his duty.

Not comfortable with the alleged harsh predicament faced by it’s members using Abia roads, the Forum paid a courtesy visit to the executive governor of Abia state, Dr. Okezie Ikpeazu in Umuahia, tabling their grievances. 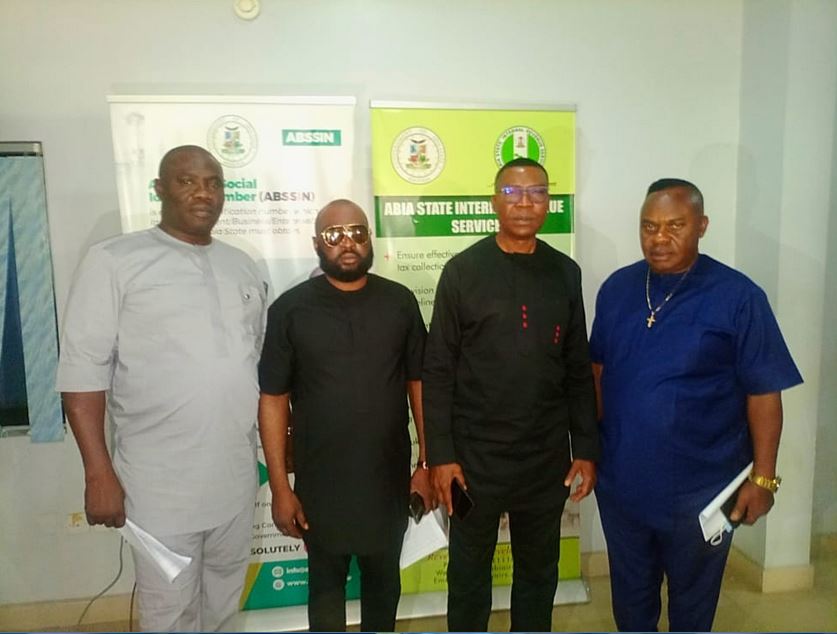 The Forum in a press release made available to All Facts Newspaper on Thursday, said the move became necessary to put a stop to “the incessant intimidation our people are getting for which Abia has unfortunately gained notoriety.” 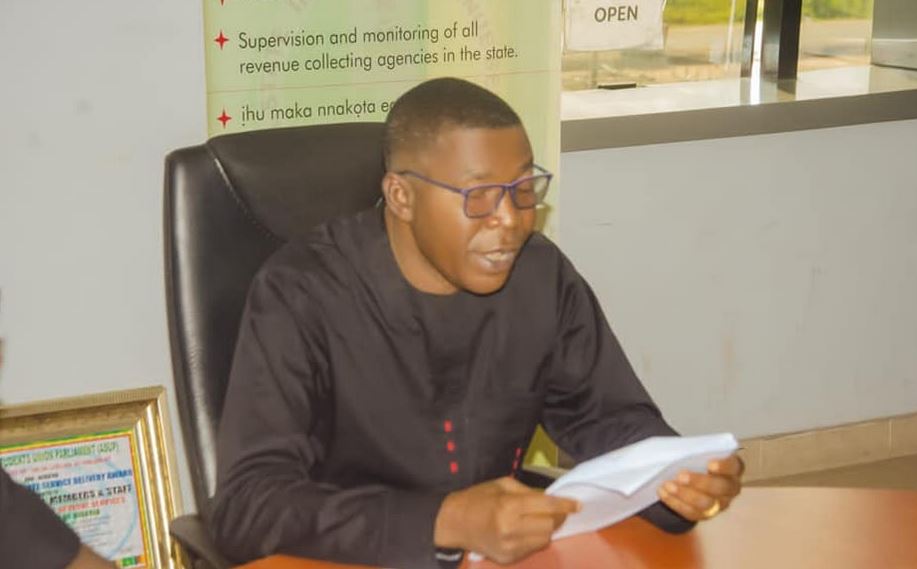 Speaking further on their motive of visiting, the group noted that they came to “fact check and seek solution to high-handedness and fragrant disregard to extant taxes and levies laws as it relates to the laws and administration of revenue laws of the federal republic of Nigeria to  members of forum nationwide,  local and states government revenue consultants  and cooperate bodies whenever their vehicles registered in other state crisscrossing or coming into Abia state.”

We came to Umuahia to seek a way forward for our members, to know why our members are being harassed, goods spoiled and trucks impounded for more than two weeks and to confirm the body in-charge for the collections of E-emblems and other transport revenues. This is all in a bid to avoid the incessant and intimidation our people are getting for which Abia has unfortunately gained notoriety.

The road transporters are our members and We assist to create Harmony between transporters and the Government both at the center and the States.”

According to the group, transportation in Abia state is expensive because of the charges transporters are forced to pay by Erondu and his workers.

“We have been at loggerheads with the cabal of extortionists in Abia State, most notably one Azubuike Erondu Ihuoma known as Mopol over emblems, Aspimss and  all other sorts of road charges. This has lasted for the past two to three years. We have reported to police in zone 9 and Abuja and also to the Deputy Governor of Abia State Rt. Hon Sir Ude okochukwu.

Some of our members have been in court with this Mopol because of the charges and treatment he hands to transporters from every part of Nigeria coming to Abia. Transportation to Abia is today expensive due to the treatment Mopol and his gang give to our people” they said.

The group noted that they are now aware that their members should not be charged for road taxes beyond E-emblem and daily E-tickets as “ASPIMMS Emblem is illegal”. They vowed to resist any further attempt by Erondu or any other person to harass their members on the roads.

“We are also aware of the new revenue law in Abia, that streamlines what commercial transporters pay, but it has been one sad experience after another because our members are forced to pay what is not in the Abia law which Mopol claims was sold to him by some agency. The worst is that the State has started serious enforcement our members are yet again being arrested by ABiRS agents because 90% of all emblems sold to our members by Azubuike Erondu Ihuoma are not uploaded in the state E-emblem platform meaning that he did not remit the monies to the State. These are as good as fake and thus can’t be verified by enforcers and so our members are still paying afresh or will have themselves restricted from entering the state.

This situation has created so much discomforts, pain and loses to transporters and their customers, indeed he is known to hold trucks with perishable goods for two weeks before releasing. Between 2019 and now this has been a running battle between transporters and this gangs. Mopol himself charges between N35,000 and  N200,000 per vehicle. Curiously, not even intervention of state officials or zone 9 would lead to any change in his actions. He boldly boasts that he is in collusion with high officials of all arms of the State Government hence cannot be stopped.

He has been a true nightmare to us, our customers and passengers.

The group requested the Abia state government to partner with them in the sales of E-emblems as Erondu have been relieved, promising that they would improve experiences of road users if obliged. 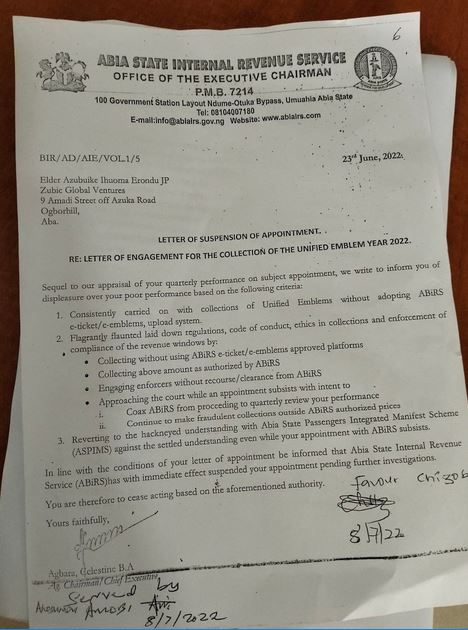 “……the State to partner with us so that we in turn shall sell their E-emblems to other parts of Nigeria. Our objective is to improve the experience road users pass through in Abia, which sadly has been very brutish as the fear of Mopol is a reality.

The Government on sighting the various papers sold our members by Mopol the Governor requested that we officially send him a petition to enable him take action, he condemned this and gave the Board of internal revenue chairman his full endorsement of all action they are taking, and asked the revenue collecting body and with law enforcement agencies to take necessary action.

He reaffirmed that the rate of 5,500 is what the state sells hence other charges above are criminal and must be treated as such.

As members we are going to resist any further attempt by Mopol or any other group of persons, who harass our member who pass through Umaro or any other part of Abia, we do this by engaging the law enforcement authorities and by retaliation which is not the best to anybody.

We want to applaud the BIR for technologies for road transport taxes and their efforts to sanitize collection on the road. They eliminated the use of paper and made it difficult to divert any Government funds.

We are happy to be at peace with the Abia state Government in their bid to collect road taxes across Nigeria, we look forward to a more wonderful relationship with Abia.

We now know the road taxes called Aspimss Emblem is not a legitimate road tax, our members should no longer be charged for road taxes that goes beyond E-emblem and daily e-tickets as all other emblems are inside the E-emblem of Abia state.