Few days ago, the news was everywhere that former Abia State Commissioner for Finance , Mr Obinna Oriaku was invited by EFCC and was detained. over mismanagement of Abia State N22 billion Paris Club Refund. But, in a swift reply Obinna Oriaku has revealed in details what he claimed happened at the EFCC, what the invitation was about and other people expected to be invited by the same EFCC.

Two different consultants Murizwalton Nig Ltd and Ziplon Nigeria Ltd were appointed between 2011 and 2014 by past administration for purposes of recovery and reconciliation of our Paris club refund figures and subsequent payment by the federal government.

Understanding the fraudulent duplication of consultants by then government and attendant high percentage of all 20% and 30% respectively totaling 50% agreed before the coming of Okezie Ikpeazu’s administration, We felt it was evil to keep to such agreement hence we jettisoned such agreements and did not follow up on their payment .

Abia: “The Reign Of Obinna Oriaku As Finance Commissioner…

Last week I got a letter through the Abia State Secretary to the state government to appear at Efcc office Enugu on 10th of June with my predecessor Dr Philip Nto.

Its unfortunate that an official letter was handed over to a media aide ,who wrote yesterday referenceing Efcc official numbers that I was being held back at Enugu Efcc for mismanagement of Paris refund even as the person I was invited together with is yet to make himself available.

I want to make it clear that Efcc invitation is not a crime and cannot be misconstrued as sentence for crime.
As Commissioner for Finance for four years, its necessary that I will be invited from time to time to shed light on what happened why i served as commissioner.

ALSO READ  See What EFCC Did With Recovered Loots

Kindly note that Obinna Oriaku at any point is willing and ready to render account of his stewardship as Commissioner of finance 2015 to 2019 and EFCC search light is welcome if that will help change the narrative of Abia state.

The invitation which included the current accountant general of Abia State Mr Kelechi Imeoria
was basically centred on why duplication of consultants for Paris refund, and to clarify who is the actual consultant and why the payments were not made at the agreed fees of 20% and 30% to the consultants.

This is sequel to a petition by Dr Murice Walton to Efcc how the State has deliberately held back their payment since 2017.

Abia was adjudged the best in management and disbursement of Paris fund by the Governors forum and the Deputy Governor Rt.Hon Ude Okochukwu was on hand to receive the award presented by the forum.He made presentation on what and how we administered the Paris fund stating the the secret of our success(Vanguard newspapers of March 21 2016 carried that news.

On receipt of the Paris refund which the Governor Dr Okezie Ikpeazu referred as ( indocide). I suggested to the Governor that all the union leaders will form a committee to disburse this money specifically for salary and pension arrears. The following represents the committee members: comrade Obi Igwe the then NLC chairman. The NUT chairman Mr Akparanata. The NULGE chairman Mr Ijeoma , The pensioners chairman (Late).The joint negotiating council Mr J.C Okoro ,The Permanent Secretary Minstry of Finance Mr Nnanna and Mr Nwaokocha from the Accountant Generals office.
These men did the work and they are all alive and can be reached for confirmation.

The Paris fund came in three trenches of N10.6b, N5.7b and N5.7b. All these funds except N1.7b were used exclusively for payments of arrears owed Abia State workers partly before the Okezie administration.

Abia and other states have been investigated severally on the management of Paris club and Abia came out clean under the watch of Obinna oriaku.

The major issue on the invitation is the fraudulent engagement of consultants by the last administration for the purposes of siphoning Abias commonwealth which characterised that adminstration.

Two different consultants were imposed on the administration of Okezie Ikpeaze from inception as these consultants with spurious fees were appointed between 2011 and 2014.

Murtize Walton was initially appointed by last administration of Sen TA Orji in 2011 when the first Paris refund of N8.2b was paid by our Sister Dr Okonjo Iwuala then Minster for Finance. Abians should know that their is know record on what that N8billion was used for.

Secondly,Murizi Waliton was issued another engagement in 2014 by same administration probably in anticipation of further Paris refund at 30% . While another consultant without any formal engagement letter Ziplon Nigeria Ltd powered by Mr Sampson Orji was issued another of such letter with consultancy fee at 20%.

The implications are that Abia on receipt of the Paris club of N22b will pay out to these conduits the sum of N11b (eleven billion)being 50% all in for the consultancy fee for same Paris refund Governors forum had initially deducted money at source for same purpose at the federal level.

Obinna Oriaku resisted intimidation ,threats and blackmail from the powers that be in Abia to pay these consultants which would have denied Abia workers the momentary relief they had at that time

Its important to state that
Abia State would have been the only State to have paid two separate consultants for same job.Other states like Benue , Akwa Ibom and Enugu were negotiating between 3% to 5 % of the Paris refund with same MuriziWalton that signed 30% with Abia State . Abia State signed all in fee agreement of 50% representing N11b Eleven billion out of the N22b we were paid as Paris refund between 2016 to 2017.

As Commissioner for finance and one with fear of God , i advised against such payments even when the threats and its implications were very glearing.

In a meeting at Abuja Governors lodge ,presided by then Attorney General Chief Umeh Kalu SAN, We asked that these two consultants go and harmonize among themselves since they were all sent from one family
(the owners of the state) as we cannot duplicate and shortchange Abians.

Obinna Oriaku refused to be part of this fraud not minding the pressure from 2016 till I left government.

What is not clear to us is if they have been paid since I am not part of the charade that has characterised the government since my exit.

This may be an opportunity to liberate Abia from the claws of the kleptomaniac family that has refused to learn from history .

Abians should note that the daily raping of our State with impunity predates this current administration and all of us of good conscience should rally round and save Abia by standing for truth not minding intimidation.

Abia: “The Reign Of Obinna Oriaku As Finance Commissioner…

By next week, others from the former Accountant general sir GC Onyendilefu to former Commissioner for finance Dr Nto, Mr Sampson Orji , former HAG and the family of Sen TA Oji should be ready for same EFCC visit .Our liberation may start from here..

Attached are the letter of engagement as at 2014 .. 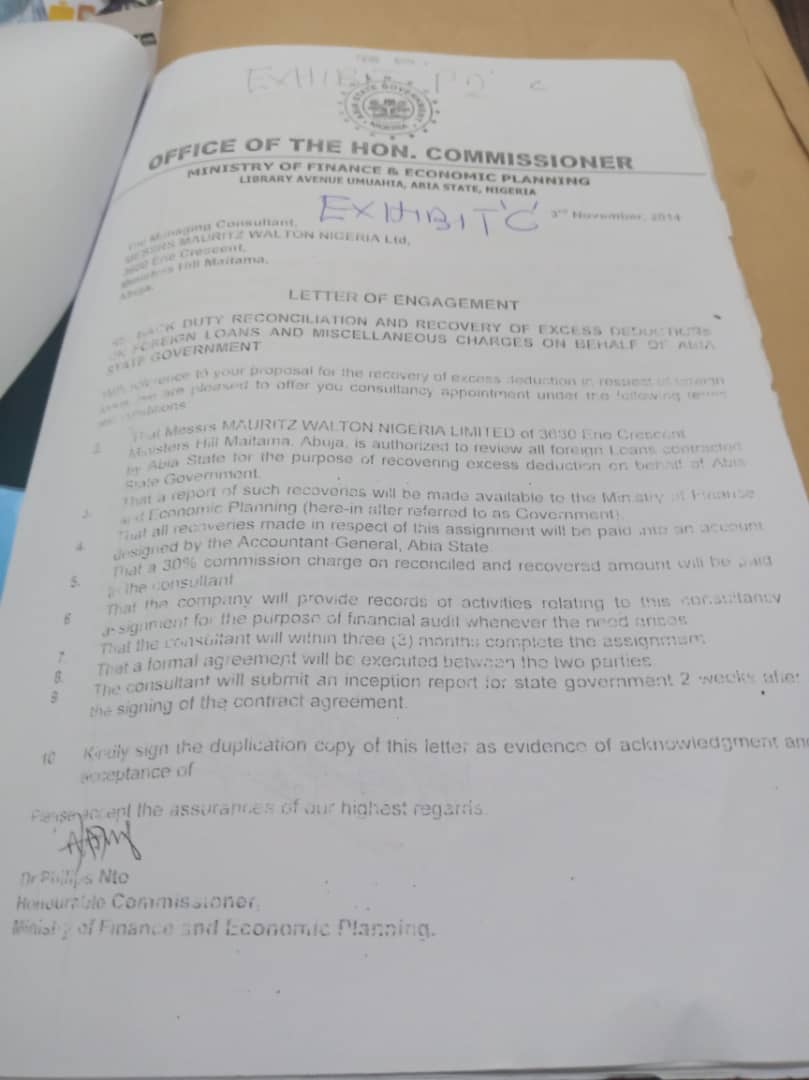 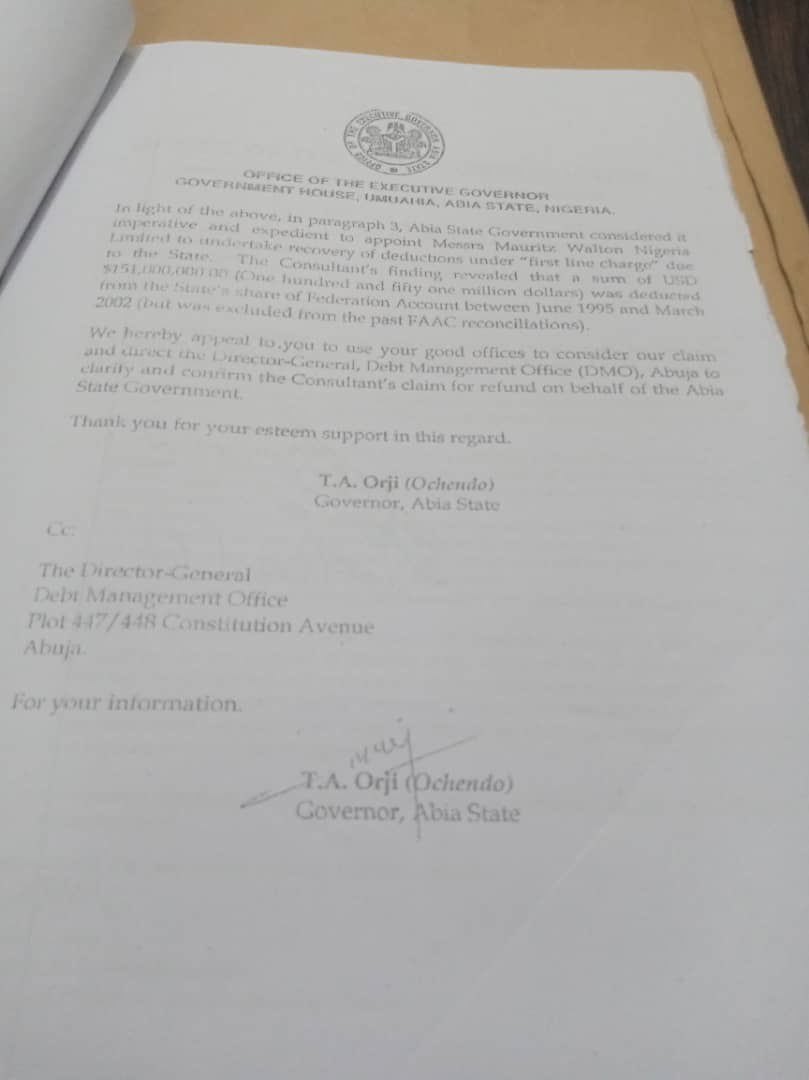 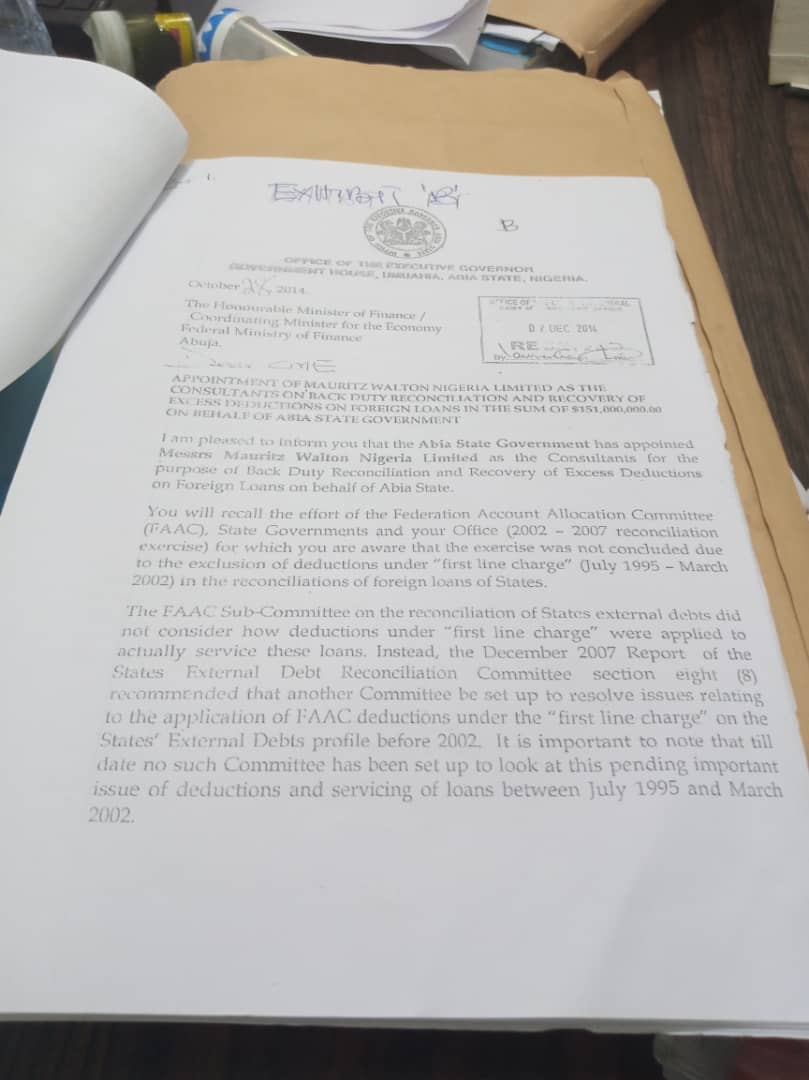 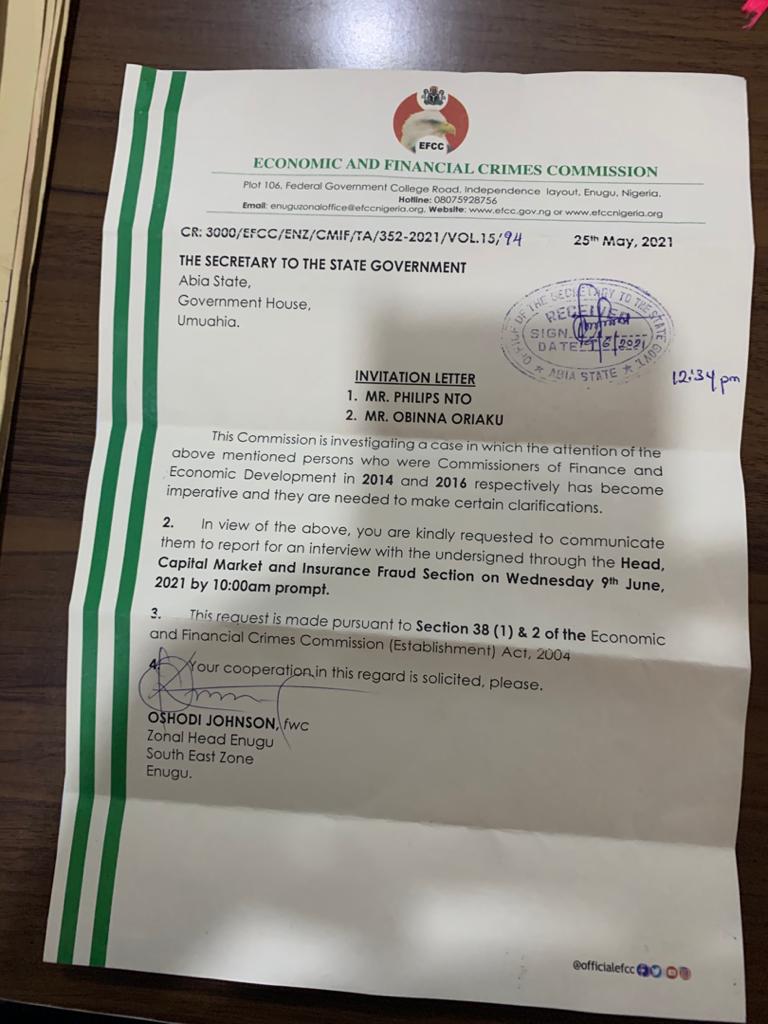 Abia: “The Reign Of Obinna Oriaku As Finance Commissioner Led To The Untimely Death…

Abia APC [Ikechi Emenike & Others] : A Gourd Of Gun Power Waiting To Explode