Former member of the Abia State House of Assembly and businessman, Hon. Dr. Samson Orji, has picked the People’s Democratic Party’ (PDP) expression of interest and nomination form for the 2023 gubernatorial election in the state. 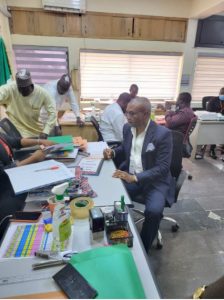 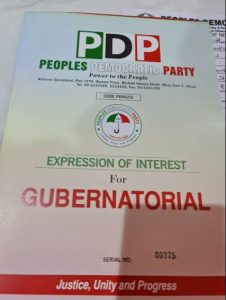 Hon. Samson Orji, is the Chairman/CEO, Scuorji Business Investment Ltd – a limited Liability Company that has branches in four major cities in Nigeria. 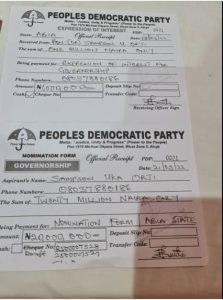 2023: Why PDP Should Strike A Deal With Kwankwaso – Reno…

Fielding questions from newsmen immediately after picking the form, the aspirant noted that the driving force behind his ambition to govern Abia state, boils down to a strong patriotic zeal to serve the people of Abia. 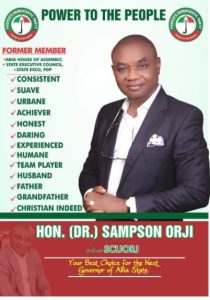 Orji who represented Arochukwu constituency in the State Assembly, stated that he understands the infrastructural deficit of Abia State, especially in Abia North senatorial zone and will remedy the challenges.

Making promises on things Abians should expect if elected as governor, Oji mentioned;

-demystifying the office of the governor so there could be interaction between him, his office and the people.

-tackling social insecurity and make civil servants live up to their bidding through a process of reward and sanction system.

– to constitute as an advisory council, all past major office holders from the state. He said these persons will help him in making critical decisions for the state interest.


Mark 11 vs 22- 24: And Jesus answered them, "Have faith in God. Truly, I say unto you, whoever says to this mountain, "Be taken up and thrown into the sea, and does not doubt in his heart, but believers that what he says will come to pass, it will be done for him. Therefore, I tell you, whatever you ask in prayer, believe that you have received it and it will be yours
Abia governorship electionDeclaration of interest formHon. Samson OrjiNomination formPDP
0
Share

2023: Why PDP Should Strike A Deal With Kwankwaso – Reno Omokri Advises | READ…