The Concerned All Progressives Congress (APC) Youth in Taraba State – a pro-Ibrahim Tukur El-Sudi supporters group – on Tuesday, 17 May, 2022 stormed the All Progressives Congress (APC) National Secretariat in Abuja to express their displeasure over an allegedly sponsored media publication against the Taraba chairman of the APC by a group parading themselves as Taraba State APC Exco.

Addressing journalists at the APC National Secretariat, Chairman of the group, Adamu, Y. Garba, said they were not happy, especially with some supposed elders of the party who allegedly sponsor campaign of calumny against the leadership of El-Sudi in the media. 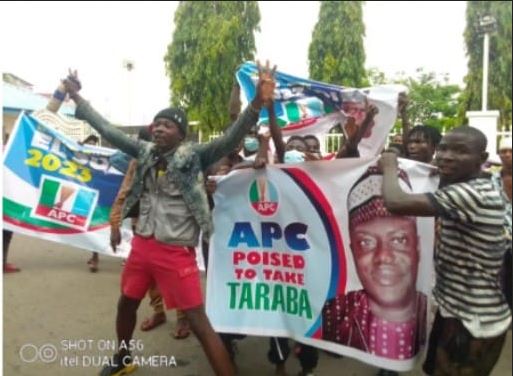 Garba said: “Our attention has been drawn to the campaign of calumny and character assassination against the person of Hon. Ibrahim Tukur El-Sudi the Chairman All Progressives Congress, Taraba State from an alleged protest carried out yesterday 16th May, 2022 purportedly held by sponsored groups parading themselves as APC EXCO at the APC National Secretariat Abuja (Buhari House).

Hon. Buba Calls For Calm Over The Alleged Impeachment Of…

“We wish to use this medium to condemn the activities of some of our political leaders who are hell-bent to have their selfish interest against the overall interest of the party in the state, aimed at unnecessarily heating up the political atmosphere in our party by sponsoring unwarranted and frivolous protest against the Honorable Chairman (Hon. El-Sudi) through their faceless errand boys christened APC EXCO, Taraba State.

“It is highly disheartening that people who are supposed to be elder statesmen in the party will be sponsoring campaign of calumny against the sitting chairman at a time when we have to join forces chase away the opposition party (PDP) from Taraba State Government House.”

Garba continued: “Furthermore, this unwarranted sponsored media engagement aimed at tarnishing the image of Hon. Chairman (El-Sudi) is a high-level show of irresponsibility on the part of the leaders who are sponsoring it.

“Consequently, Hon. El-Sudi has been reportedly targeted by these desperate and self-centered politicians in Taraba State and their proxies with the worst kind of character assassination, solely because he stands for justice, equity and fair play and refused to do their bidding.

“As a result of the above, there were several attempt by these leaders through their representatives and surrogate to do everything within their powers to hinder him (El-Sudi) from becoming the APC Chairman Taraba State. For example, they obtained different Court Orders to restrain him from becoming the APC chairman, calling him malicious names. But when all these failed the desperate politicians now resorted to sponsor Sklombo/(thugs) boys in Abuja to stage a protest against him at the Buhari House APC National Secretariat Abuja, all in the bid to achieve their selfish interest.

” We use this opportunity to call on these leaders to stop fanning the ember of discord and instigating crisis within our dear party which is likely to embarrass or have adverse effects on the party or can bring the party to ridicule and hatred of which any of the above mentioned activity is an offence, contain in Article 21 of the APC Constitution, 2014 as amended”

Hon. Buba Calls For Calm Over The Alleged Impeachment Of Adamawa APC Chairman

“We Don’t Meddle With Other Party’s Affairs”  – APC…