The Imo State governor, Senator Hope Uzodinma has marked the second anniversary of the Supreme Court judgment which instated him as the governor of the state.

Recall that the 2019 Imo State gubernatorial election held on March 9, with PDP’s Emeka Ihedioha polling 38.29% of the total votes, defeating APC’s Uche Nwosu who got 26.66% of popular votes, and several minor party candidates.

According to the results released by the Independent National Electoral Commission (INEC), Ihedioha won 11 out of 27 LGAs, making him the winner of the guber race, while Nwosu won 10.

“Two years ago, today, justice was delivered to Ndi Imo as  I reclaimed our people’s mandate at the Supreme Court. As a product of justice, I have continued to uphold the same values under the #sharedprosperity mandate of our government to secure our common patrimony for all.”

ALSO READ  PDP are behind Oshiomhole's ordeals, Gov. Hope reveals
DID YOU SEE THIS

IMO: Okorocha Reacts To Allegation Of Him Killing An…

I Am Sorry For Any Confusion I Might Have Caused – Tinubu… 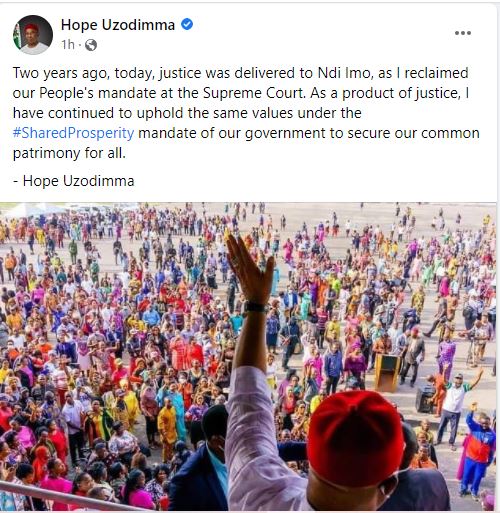 IMO: Okorocha Reacts To Allegation Of Him Killing An 11-Year-Old Boy | DETAILS

Wealth Does Not Guarantee Peace Of Mind – DJ Cuppy…

B00M: Bella Shmurda Slammed By Fans Over What He Did To…

Intra City Train Fare Will Not Exceed N300 Per Journey –…

HEALTH: Why You Should Stop Consuming Energy Drinks -Doctor…

Why Abdulmalik Tanko Was Sacked As A Headmaster Before…